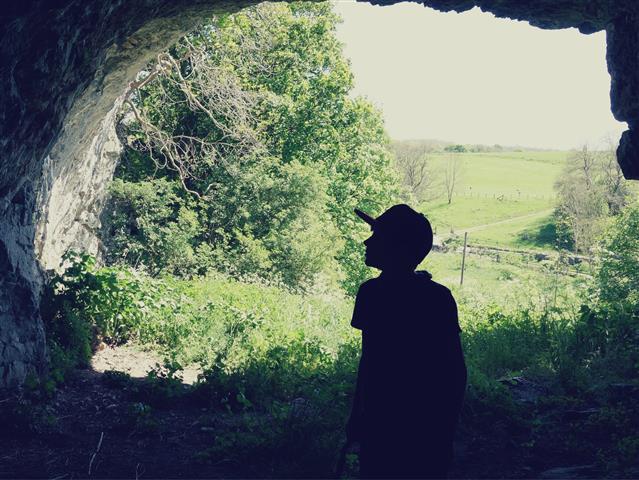 Robb first spotted the cave as we drove past it to get to the The Raven Inn; a community run pub in the middle of Llanarmon-yn-Ial, which is worth a mention as it’s lovely there.  So a huge high five to everyone involved.  After a lovely meal and a cheeky pint, we went in search of the cave.  A nice stroll through the village and over the bridge and we spotted it.  To get to the cave we thought it was just a walk through the field…it turns out we were slightly wrong.  Halfway through the field we realised the rest of it was full of nettles and other nasties.  So we back tracked a bit and Paul decided on a route for us to take to get us to this cave.  What followed was tears {the bois}, swearing {paul}, worries of what the hell we were going to find in the cave {me}, hesitation {the bois…and maybe me…}, thoughts on treasure chests {alfie}, more worries about snakes {me}…what mythical creatures we were going to find up there {bois…and me} and what if we found a dead body?!…{me me me me me ME!}.  Thankfully, after some rock climbing/balancing a lot of nettles and branches, we arrived at the cave in one piece!  We stayed at the cave for a while, looking for signs of something…but not much to report, just some empty buckets and creepy faces in the stonework…which kind of creeped me out when I looked back at the photos afterwards.