This post has been a long time coming…but it has taken me until now to get all of the money together, sent in and our total amount confirmed.

For those of you who don’t know, my sister, Lowri and I decided we were going to complete the Yorkshire Three Peaks Challenge as a fundraiser for the Alzheimer’s Society, a cause very close to our hearts as not only have we seen the effects this disease has had on our handsome, footie mad and fun loving Uncle Rich, but also our surrounding family members.  And, like all families, there’s a lot of love and support in this big ol’ family of ours.

So, we told ourselves, if doing this helped in any way possible, we’d do it.  And do it we did.  On what started off as a very wet and dreary morning… 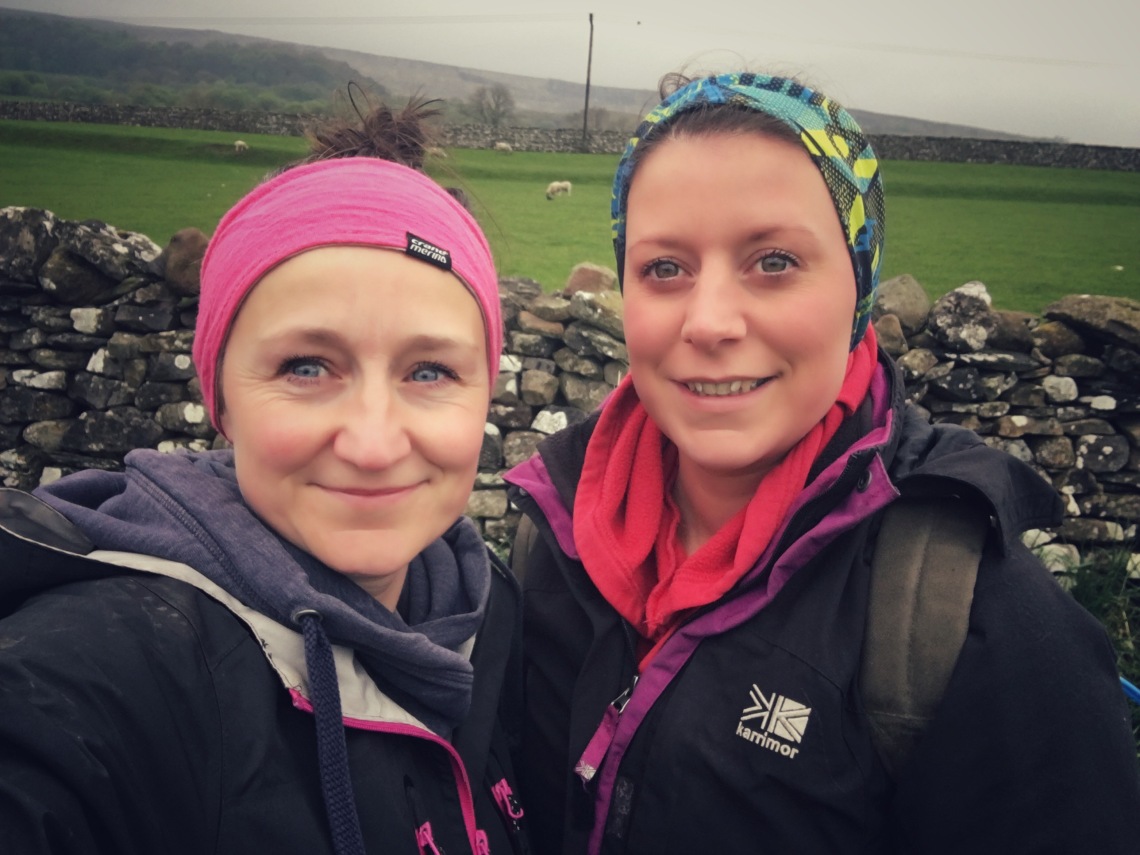 I’ve never camped with Low before…and, I’m not sure if she’d agree, but I feel we need to do it again.  Just for the LOL’s…Low?!…

On our way up to the first peak, Pen-y-Ghent, it was very, very wet.  But, we made it in good time…Low got to the top before me and without any words being said, I had a feeling her competitive side was coming out…excuse my face, here.

And then it was the long, long road to Whernside…I’ve cut a lot of pics out as there was a lot of them but it was a long ol’ haul this one and we were warned…

We made some friends along the way… 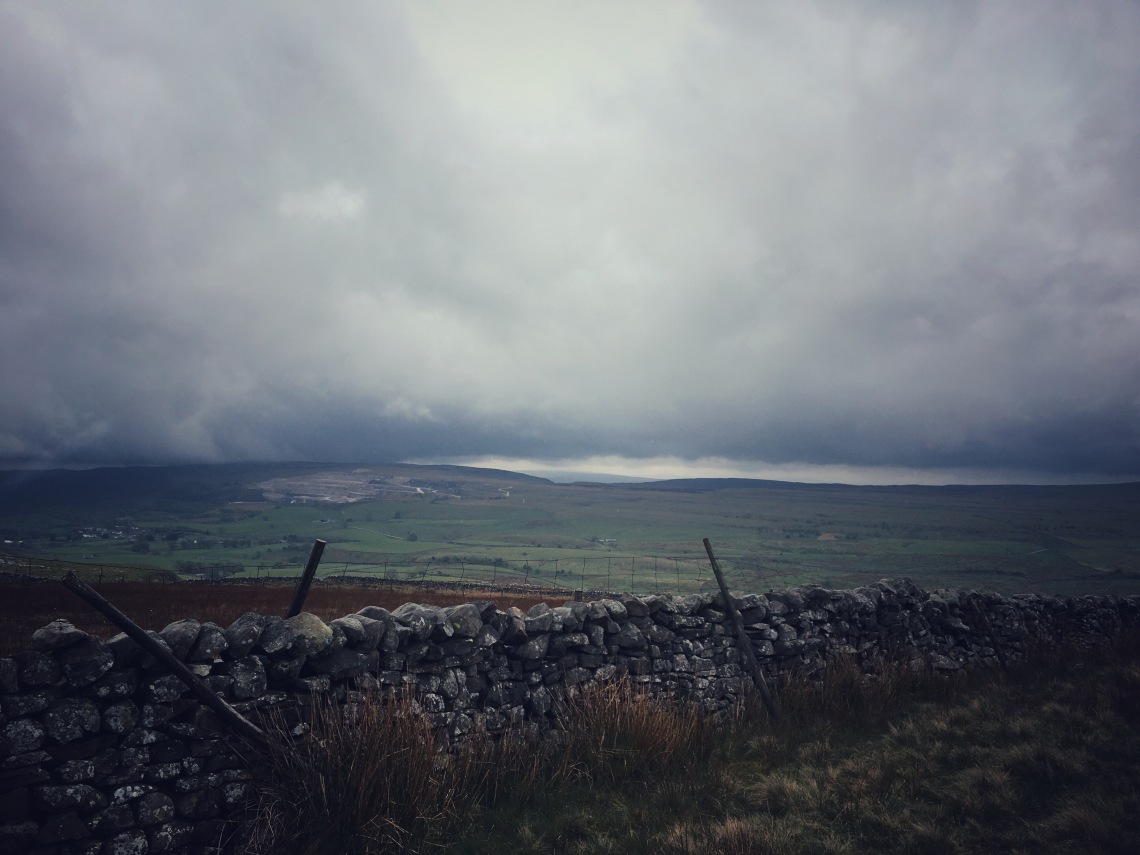 Four Things you should know about dementia…
1. Dementia is not a natural part of ageing
We all forget a name or a face sometimes. Especially as we get older. But dementia is something different.
Memory problems are one of a number of symptoms that people with dementia may experience. Others include difficulties with planning, thinking things through, struggling to keep up with a conversation, and sometimes changes in mood or behaviour.
Dementia is not a natural part of ageing and it doesn’t just affect older people. Over 40,000 people under 65 in the UK have dementia. This is called early-onset or young-onset dementia. 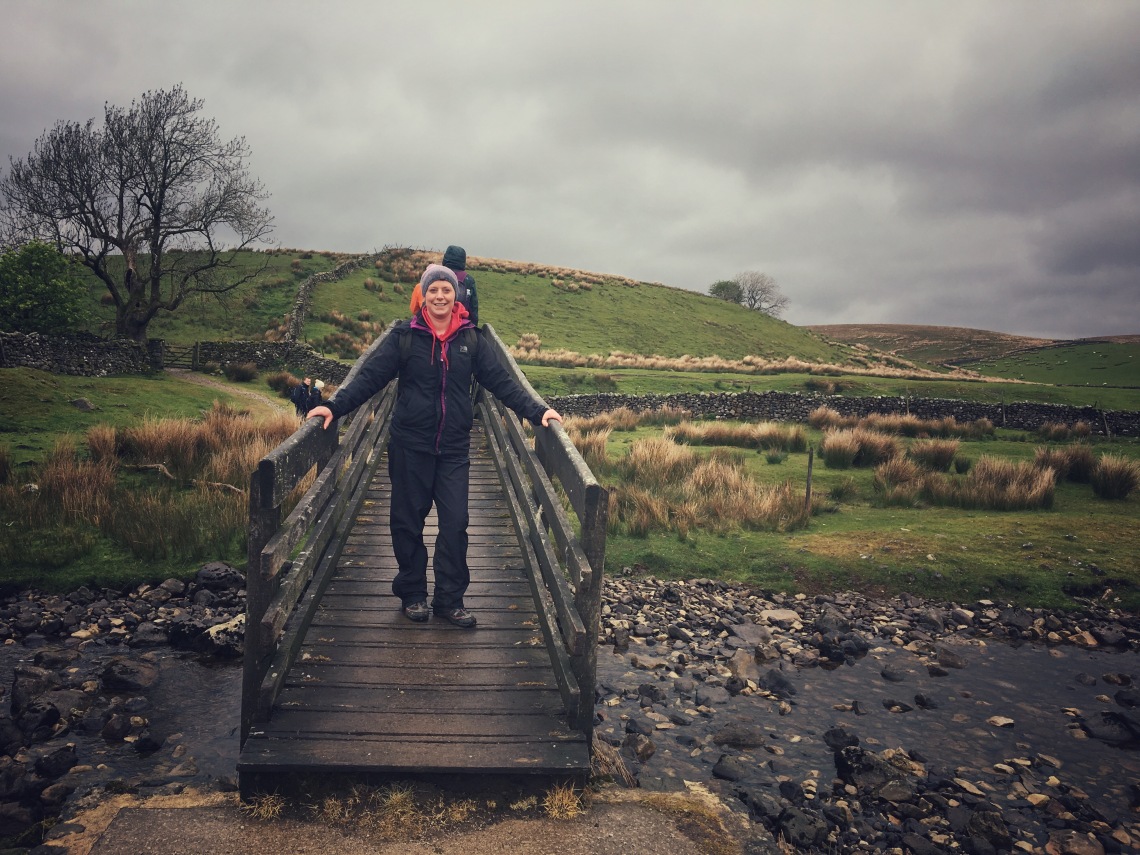 3. It’s not just about losing your memory
When most people hear the word dementia, they think of memory loss.
And it does often start by affecting the short-term memory. Someone with dementia might repeat themselves and have problems recalling things that happened recently. But dementia can also affect the way people think, speak, perceive things, feel and behave.

4. People can still live well with dementia
Although there is no cure for dementia, scientists and researchers are working hard to find one.
Until that day comes, support and treatments are available that can help with symptoms and managing daily life. These can allow people with dementia to lead active, purposeful lives and carry on doing the things that matter to them most.

Ribblehead Viaduct…also known as the half way point!  After the long stretch we’d just walked, it was quite nice to sit down, grab a paned and some food while the rest of the group we were with, gathered together. 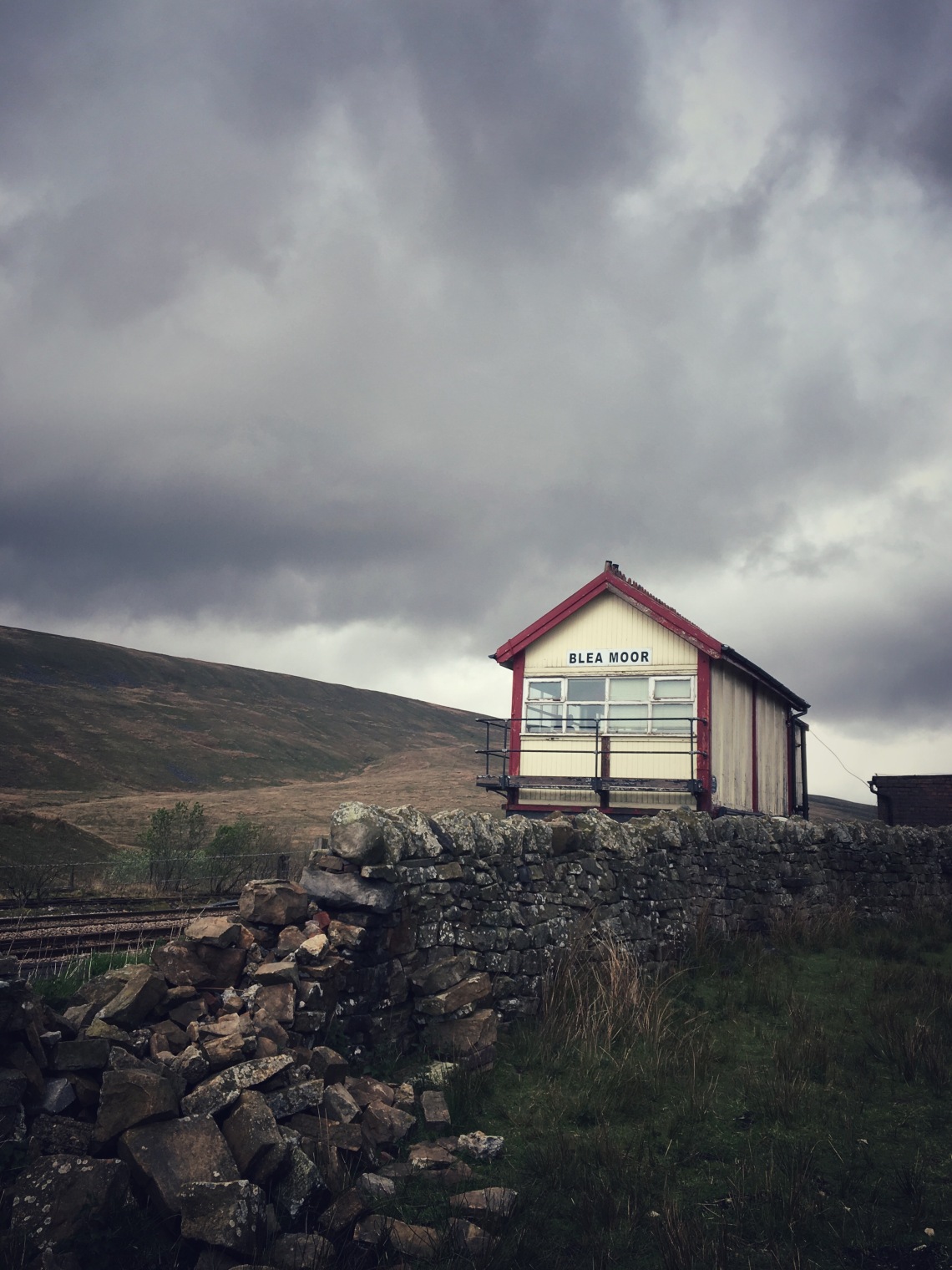 But, before we got too comfortable and with two peaks still to go, we decided to crack on. 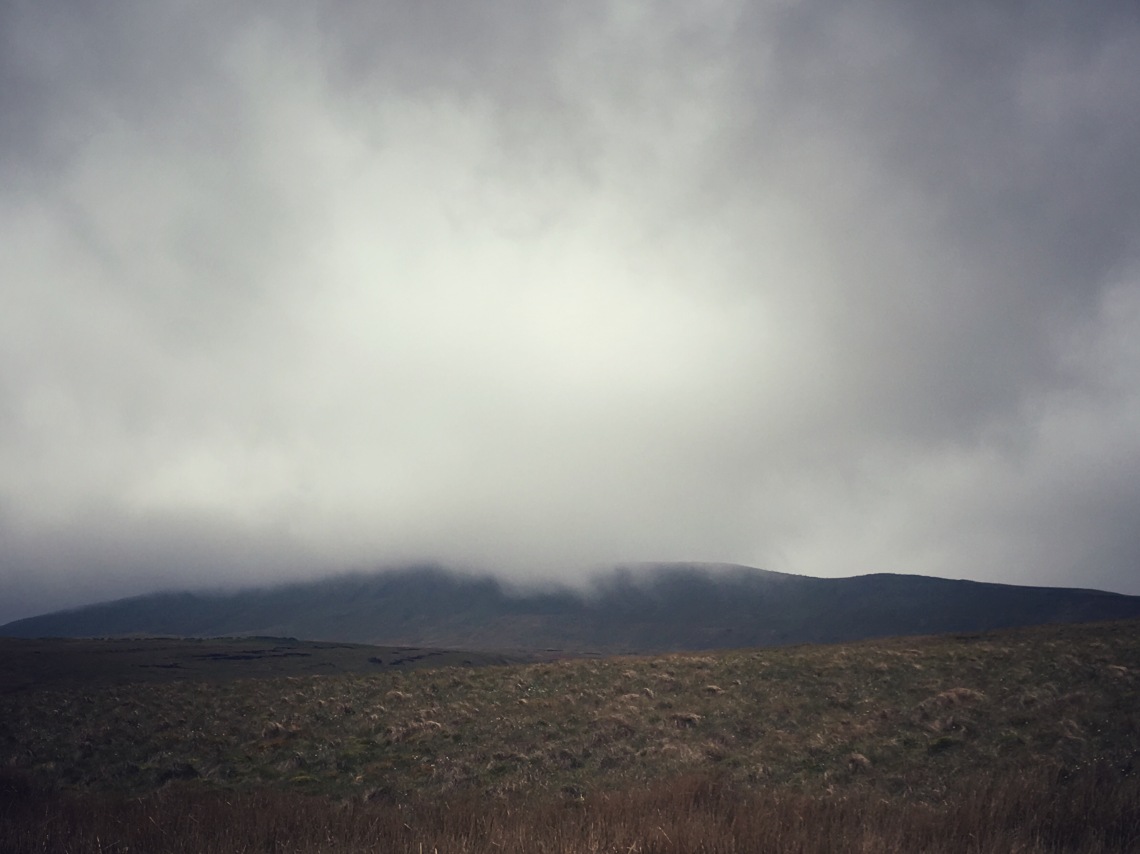 We knew the weather was going to get better by the afternoon…still, we didn’t want to get too excited about it… 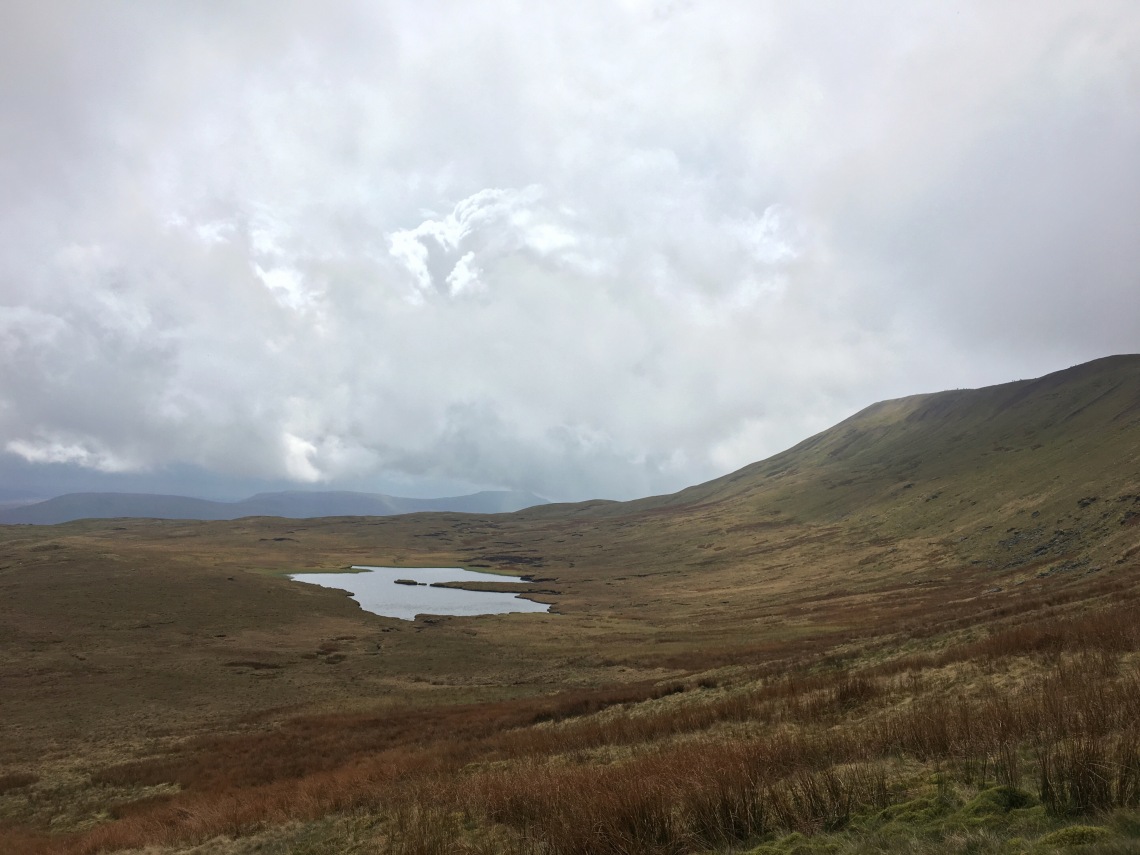 Slowly but surely, as we made our way up Whernside, it was definitely getting brighter.

After some struggles and stops and starts…we were at the top of Whernside!  2 out of 3, done!  Low didn’t tell me at the time, but this is where she hit her emotional point.  We decided to have a lunch break but the weather had other ideas and just as it got us all excited for warmer weather…it started to pour down again…

Descending Whernside it was becoming obvious that Low had injured herself and the café and toilet stop right at the bottom, couldn’t have come at a better time for us all.  As Low made her way down on her backside, one man quipped “I’ve never seen it done like that before!…” I honestly thought Low was going to swing for him…her face was a picture!

After a good giggle with the rest of the Outdoor Bloggers, spirits were up again and we were ready for the final ascent…Ingleborough.

By now the sun was definitely out and was here for the rest of the afternoon.  As we approached Ingleborough, we could suddenly see just what the “scramble up” that everyone kept mentioning was…so before we attempted it, we sat down for some of Sarah’s flapjack, you know, just to get us up there…

For some reason, I blame the flapjack….I didn’t take a picture to show you…but believe me when I say it was a tough scramble up, mostly on our hands and knees.  There was one or two “ooh, look at the view!” stops as we made our way up…if you know what I mean…

Like this one, showing Whernside in the distance…and reminding us of just what we had achieved.

And this is where I had my emotional moment!  Just after this photo was taken, I looked around as you could see the other two peaks from here…and suddenly, it hit me.  We’d bloody done it!  We still had another 5 mile walk back to camp, but we’d bloody done it.  Whenever it got hard along the hike, I kept repeating “for Uncle Rich” under my breath and right at this point, I was like “YES!  FOR UNCLE RICH!  It’s  something like, for every £50 raised, Uncle Rich or someone else in his position, gets an activity/day out or something of the sort…so repeating that to myself, made the difficult parts a lot easier. 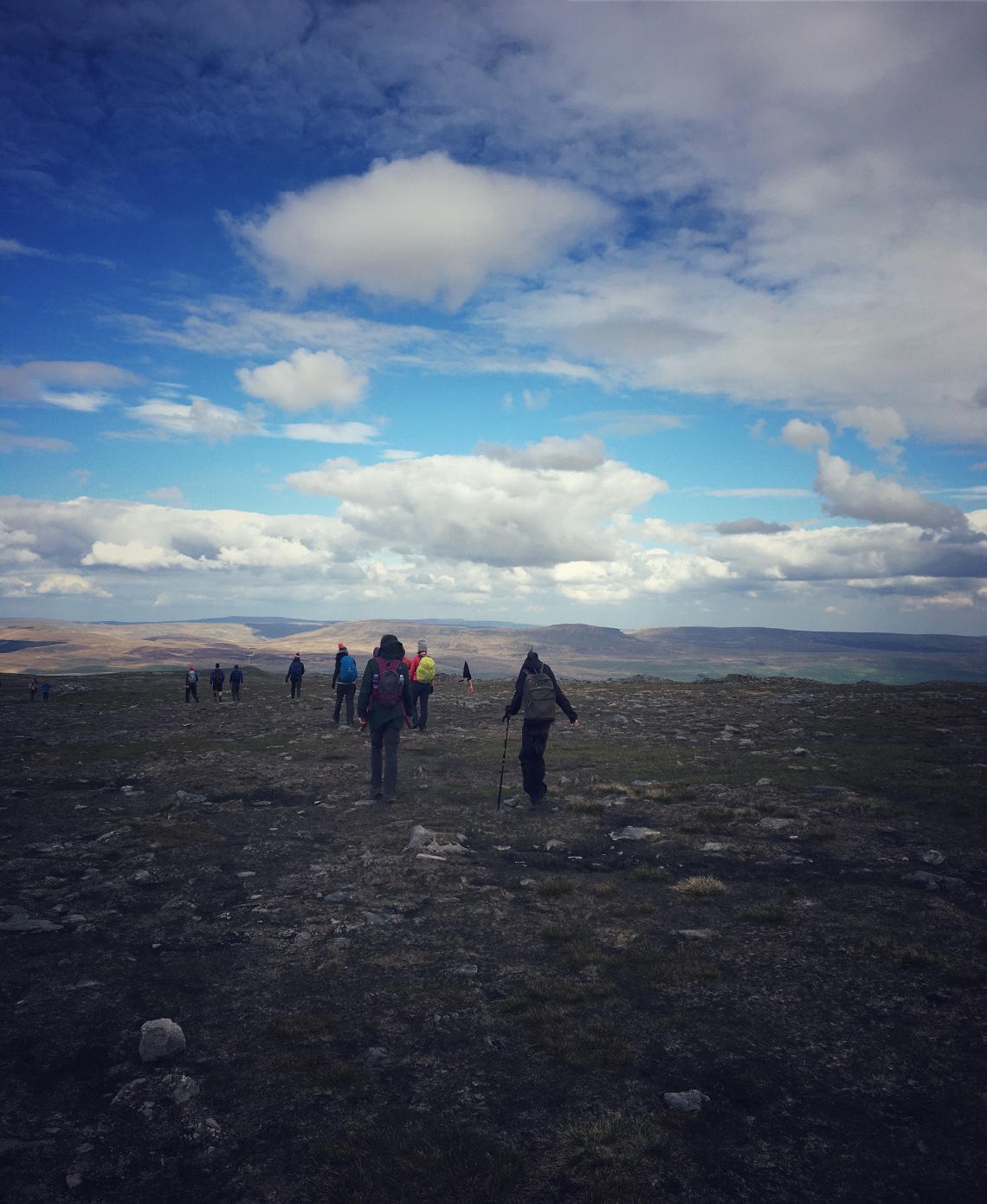 Peak 1, Pen-y-Ghen on the right and Peak 2, Whernside on the left, photo taken right from the spot of Peak 3, Ingleborough.

On our way back down to our campsite, and along the whole way really, we chatted with a variety of different people from all over, doing this walk for different reasons, but it was as we made our back that I got talking to someone who grew up in Machynlleth…and he said it felt like a treat to be hearing the Welsh accent again.

This last 5 miles was tough…tough on the legs as well as the feet and by now I could feel all the blisters.  It was just Low and I by this point out of our group and I think we were thankful for others chatting around us as we weren’t really chatting much to each other…We kept going and Ella and Owen seemed to call Low at just the right moment, to lift their Mam when she needed it the most and give her that last final boost she needed.

Never before have we both been so happy to see a train station!  Our campsite {and wine!…} was just around the corner!

We had ideas of having a few at the pub to celebrate, {and because we had no kids!…} it turns out a bottle of wine to share with a steak dinner and we were ready for bed by 9.30!

A big thank you to everyone at the Outdoor Bloggers for arranging this weekend and supporting each other throughout the day.

We can’t thank you all enough!

One thought on “The Yorkshire Three Peaks Challenge; Fundraising for Alzheimer’s Society.”